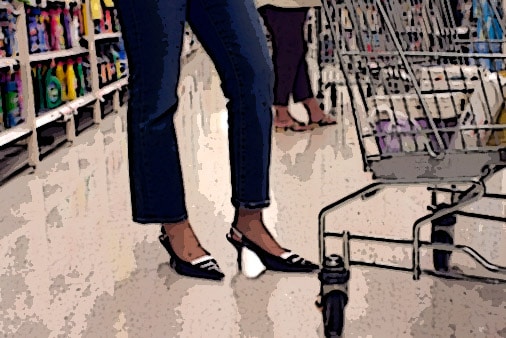 There has never been the slightest doubt in my mind that the God who started this great work in you would keep at it and bring it to a flourishing finish on the very day Christ Jesus appears. Philippians 1:6 MSG

He was a handsome young man–about the age of sixteen, I guessed. He towered over his mother a good four or five inches. His mother was petite and probably in her forties. She had once been a natural blonde—you could just tell—which reminds me, my next post is on judging.   I observed as the young man began to assist his mother in taking the groceries out of the cart and placing them onto the conveyor belt. What happened next was ghastly. Every time he placed some items the mother picked up the same items and moved them somewhere else on the belt. Finally, when his mother took the last items he had placed and put them back in the cart, the boy gave up and walked to the bagging area. The mother paid and the two repeated the same pattern. The boy would bag items as the mother would undo what he did and redo it to her satisfaction. Again the boy backed away.

I thought to myself, how frustrating and belittling that must have been for him. I would never treat my kid like that. Just then, the Ghost of Grocery-Store-Shopping-Past reminded me of the times I literally broke out in a cold sweat when my children offered to bag the groceries and how I said, “Oh how sweet, but no thanks, I got this.” So I reminded him about the times I actually let my children bag the groceries. He then pointed out how I had paid quickly then hovered over them giving them excessively detailed instructions on how to bag each item.  We went back and forth until I completed my transaction and pushed the loaded cart out the sliding doors. (Don’t be alarmed. That was just a little poetic license there!)

Was I a control freak too? If so, how is it that I never realized this before observing this mother and son at the grocery store? Yes, the word obsessive had been slung loosely at me a few times over the years by friends and family members. But before this day, I pretty much defined obsessive as a word used by the lazy to describe the dedicated!

I continued to perseverate over this self-discovery until later that day when I was hanging out with some colleagues for a time of fellowship.  One of the topics we discussed was adult children still living at home. I was thoroughly enjoying myself until one member of our group shared how after she graduated from college she moved back in with her parents for a brief stay. She told us how she felt when after she would load the dishwasher, her mother would rearrange the dishes before it could be turned on.

This brought me back to my recent self-discovery. I ALWAYS rearranged the dishwasher when someone did not load it my way. This was rapidly turning into a Burning Bush Sighting and not a good one compared to others I have experienced when God was just speaking encouragement or direction into my life! For new readers, Burning Bush Sightings are experiences when you know God is undoubtedly speaking to you. It is when He gets your attention by repeating Himself through His Word, circumstances or conversations. (Recently, I became aware that there is another name for these types of experiences. Whereas I call them Burning Bush Sightings, Margaret Feinberg in her book, The Sacred Echo : Hearing God’s Voice in Every Area of Your Life calls them Sacred Echoes. CLICK HERE to hear Feinberg describe Sacred Echoes.)

Although nobody likes to have their flaws exposed, especially Control Freaks, I know that when my Heavenly Father makes me aware of them, it is for my own good. He has lovingly showed me how my control freakery affects those people I love. Just like the mother in the grocery store, I have unknowingly belittled and frustrated those dearest to me. When I have sat in the passenger seat and barked out to the person driving, “Go around that car!”  “Turn here, it’s faster.” “Why are you parking here? There’s a space closer to the door.”, demanded to be in charge of the remote control when watching television, exhibited perfectionist tendencies, and micro managed others with unrealistic expectations, I have not only hurt others, I have also hurt myself.

Most control freaks do not try to control because of some incessant need for power. The control is just a surface symptom of deeper underlying struggles with fear, trust, anxiety, insecurity or helplessness. They often feel they have to hold everything together which I know from experience is extremely exhausting. We were not designed to carry that kind of heavy burden as evidenced from a study by the University of Bradford Management Centre, in which control freaks were found to be more prone to insomnia, palpitations, high blood pressure and chronic fatigue.

I believe God used that mother and son to reveal this behavior in me, not to condemn me but to transform me and bring healing into an area of my life that needed His touch. “Coincidentally”, my devotion before I went to bed that night was from Psalms 34:1-9 NLT!

I will praise the Lord at all times. I will constantly speak his praises.  I will boast only in the Lord; let all who are helpless take heart. Come, let us tell of the Lord’s greatness; let us exalt his name together.  I prayed to the Lord, and he answered me. He freed me from all my fears. Those who look to him for help will be radiant with joy; no shadow of shame will darken their faces. In my desperation I prayed, and the Lord listened; he saved me from all my troubles. For the angel of the Lord is a guard; he surrounds and defends all who fear him.   Taste and see that the Lord is good. Oh, the joys of those who take refuge in him!  Fear the Lord, you his godly people, for those who fear him will have all they need.

Emmanuel Teney said, “As your faith is strengthened you will find that there is no longer the need to have a sense of control, that things will flow as they will, and that you will flow with them, to your great delight and benefit.” Lord, increase our faith! (Luke 17:5 AMP)  Transform those of us who try to control because of our struggles with fear, trust, insecurity and helplessness. Let us not be disheartened but remind us that you will complete the work you began in us! LH

(Note: The intention of this post was not to make light of serious disorders and imply all you need to do is have faith. If you believe your controlling behavior is adversely affecting your ability to function or is dangerous, I would encourage you to see a professional counselor.)