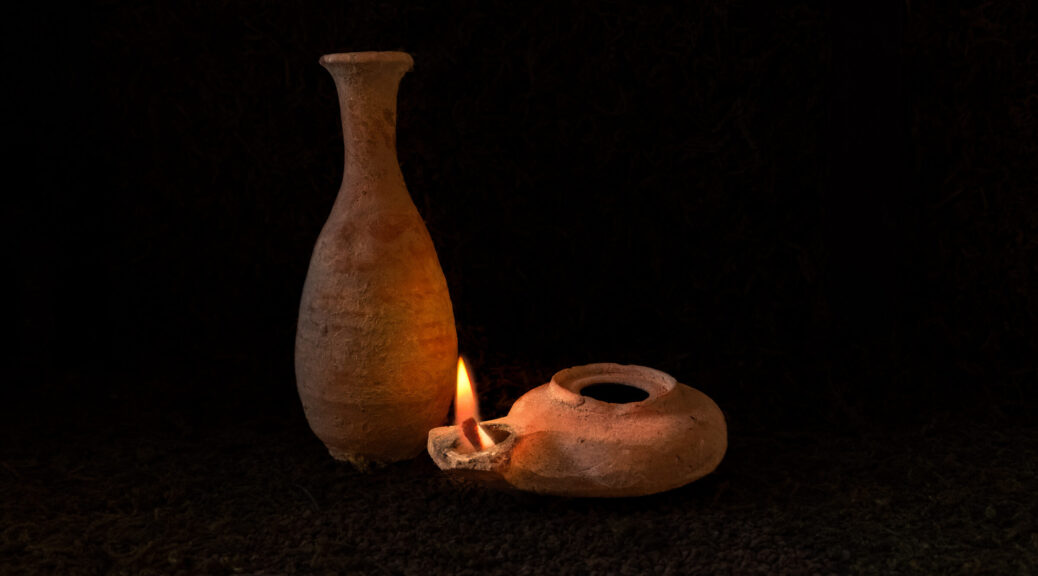 The true light, which gives light to everyone, was coming into the world. The light shines in the darkness, and the darkness has not overcome it.  John 1:9,5  ESV

Some weeks ago, the electricity went out on a dark early Fall evening.  My husband was showering after a long day at work and each of the kids were in their rooms alone in the dark. I called to my son and daughter that I was coming to them. I began to look for my cellphone and started to panic in the darkness when it wasn’t nearby.  After what seemed like an eternity, I located the phone and turned on it’s light.  I checked on the kids then started frantically looking for flashlights, candles and matches. We had not placed these items in any strategic or convenient place and after minutes of looking in cabinets, drawers and closets with only the light from my iPhone, I managed to scrounge up a couple of candles and a flashlight.  We then gathered in the family room and passed the time talking and singing in the candlelight. Eventually, with still no electricity, we all went to bed early. What a night!

The following morning, the electricity was on again but I was so disappointed in our lack of preparedness. What if the electricity hadn’t come back on? The only thing we wouldn’t have to worry about would be toilet paper – we learned that lesson at least. 🙂  As I was processing all of this, I felt the Lord prompt me to read the Parable of the Ten Virgins found in Matthew 25:1-13  NIV:

“At that time the kingdom of heaven will be like ten virgins who took their lamps and went out to meet the bridegroom. 2 Five of them were foolish and five were wise. 3 The foolish ones took their lamps but did not take any oil with them. 4 The wise ones, however, took oil in jars along with their lamps. 5 The bridegroom was a long time in coming, and they all became drowsy and fell asleep.

6 “At midnight the cry rang out: ‘Here’s the bridegroom! Come out to meet him!’

7 “Then all the virgins woke up and trimmed their lamps. 8 The foolish ones said to the wise, ‘Give us some of your oil; our lamps are going out.’

9 “‘No,’ they replied, ‘there may not be enough for both us and you. Instead, go to those who sell oil and buy some for yourselves.’

10 “But while they were on their way to buy the oil, the bridegroom arrived. The virgins who were ready went in with him to the wedding banquet. And the door was shut.

13 “Therefore keep watch, because you do not know the day or the hour.

It has been over a month since the lights went out and the Lord has been massaging some things into my spirit.  I have studied and read as much as I could about this parable and there is much written about it. All fascinating and well worth the time to explore.  But rather than go into the Jewish wedding culture of Jesus’ day or all the scholarly commentary and prophetic symbolism,  I would just like to focus on the main point of the parable and what I believe God wanted to say to me. Be Ready!

The consensus is that the bridegroom represents Jesus which is based on many scriptures in the Bible (John 3:29; Matthew 9:15; Mark 2:19; Luke 5:34; Revelation 19:7, 22:17; 2 Corinthians 11:2). Jesus is explaining what the Kingdom of God will be like at His second coming.  We know Jesus is talking about the last days because of the context. He is speaking with his disciples at the Mount of Olives and everything before this parable (Chapter 24) and after (the rest of Chapter 25) is referring to the last days.

In this parable there were five foolish virgins and five wise virgins. All had lamps, all were waiting for the bridegroom to arrive and all fell asleep when the bridegroom’s arrival was delayed. The only difference between the foolish and the wise virgins was that the wise virgins brought a jar of oil and their lamps continued burning brightly in the midnight darkness. They were prepared in the event that the arrival of the bridegroom would be quite late.  They were not going to leave any possibility that they would not be ready when the bridegroom came.  At midnight the bridegroom’s arrival was announced but the lamps of the five foolish virgins were out of oil and they missed the procession because they had to go buy some.  When they finally made it to the wedding banquet, the doors had been closed. They called out to the bridegroom to let them in and his response was, “Truly I tell you, I don’t know you.” Then after finishing the parable, Jesus said, “Therefore, keep watch because you do not know the day or the hour.”

The Contemporary English Version says: 12 But the groom replied, “I don’t even know you!” 13 So, my disciples, always be ready! You don’t know the day or the time when all this will happen.

The New American Standard Bible puts it like this: 12 But he answered, ‘Truly I say to you, I do not know you.’ 13 Be on the alert then, because you do not know the day nor the hour.

In verse 25:12, the words, “I do not Know you“, the Greek word used for “know” is Oida, which in this instance means, you stand in no relation to me.  Does this sound familiar to you?  In Matthew 7:21-23 NIV on the Sermon on the Mount, Jesus has this same response, “21 “Not everyone who says to me, ‘Lord, Lord,’ will enter the kingdom of heaven, but only the one who does the will of my Father who is in heaven. 22 Many will say to me on that day, ‘Lord, Lord, did we not prophesy in your name and in your name drive out demons and in your name perform many miracles?’ 23 Then I will tell them plainly, ‘I never knew you. Away from me, you evildoers!’

This is the first thing that really got my attention. Jesus’ rebukes are very sobering stuff! How is that one can think they are in relationship with Jesus and then find out too late that He doesn’t even know them.  In the Passion Translation Matthew 7:21 reads, “Not everyone who says to me, ‘Lord, Lord,’ will enter into heaven’s kingdom. It is only those who persist in doing the will of my heavenly Father.

The next parable in Matthew 25:14-30, after The Ten Virgins is the Parable of the Talents. Here, Jesus is also likening this to the Kingdom of Heaven in the last days. Cutting to the chase, while two of the servants used their talents wisely, the one who was afraid and buried the one talent gets another sobering rebuke. “But his master answered him, ‘You wicked and slothful servant!‘” (vs 26) “Cast the worthless servant into the outer darkness. In that place there will be weeping and gnashing of teeth”

The second and main thing that got my attention was Jesus’ admonition in  25:13  to Watch, to be alert, to be ready. I felt God was warning me and graciously exposing my foolishness in letting by spiritual “lamp” go dark.

The past few years have taken a toll on me and just about the only thing I haven’t doubted is the Lord. Well maybe I have. Why else would I be hiding like Gideon?  Isolating, avoiding social media, not writing on this blog for two years and spending an inordinate amount of time cursing the darkness? (Writing this is hard and humbling but Christ compels me to live in repentance and honesty.)

Not coincidentally, I recently came across a sermon entitled, “The Invincible Strategy” which was written by William Lonsdale Watkinson in 1907. In it he says, “Evil can be driven out of society only as you bring to bear upon it the light of truth, the charm of purity, the majesty of right, the magic of love…Evil is not overcome by denunciation. But denunciatory rhetoric is so much easier and cheaper than good works, and proves a popular temptation. Yet it is far better to light the candle than to curse the darkness.”

These past years, I have been focused so much on denouncing the darkness. As fear can often do, it made me forget. I somehow forgot that my Savior is The Light of the World

Again Jesus spoke to them, saying, “I am the light of the world. Whoever follows me will not walk in darkness, but will have the light of life.” John 8:12 ESV

and that He told me I am the light of the world too. (I love how the Message puts it!)

Here’s another way to put it: You’re here to be light, bringing out the God-colors in the world. God is not a secret to be kept. We’re going public with this, as public as a city on a hill. If I make you light-bearers, you don’t think I’m going to hide you under a bucket, do you? I’m putting you on a light stand. Now that I’ve put you there on a hilltop, on a light stand—shine! Keep open house; be generous with your lives. By opening up to others, you’ll prompt people to open up with God, this generous Father in heaven. Matthew 5:14-16 MSG

Everywhere I look, God in His goodness has been sending me reminders to SHINE.  Recently, I was moved by the painting below which is part of the Christmas decorations in the foyer of our church.  The artist graciously gifted it to me and I will treasure it always.

This Christmas Season we celebrate when The Light first came into our world. (John 1:1-13) When He comes again, will He find faith on the earth? (Luke 18:8) Dear Lord, may you find us ready,  about your business and our light burning bright.