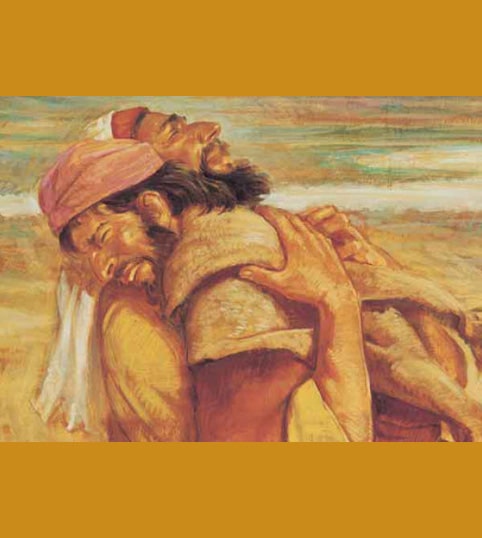 But Esau ran to meet Jacob and embraced him; he threw his arms around his neck and kissed him. And they wept. Genesis 33:4 NIV

Recently as I was doing the Old testament reading for the One year Bible, I read this verse as I have many times before. But this time it hit me, Wait a minute, what happened? The last time Jacob was with Esau things weren’t so great between them! In fact the Bible records this little family secret:

Esau held a grudge against Jacob because of the blessing his father had given him. He said to himself, “The days of mourning for my father are near; then I will kill my brother Jacob.” Genesis 27:41 NIV

How did Esau go from wanting to kill Jacob for stealing his birthright and blessing to this heartwarming reunion with his younger sibling?

The Bible doesn’t give a lot of detail on Esau. But the accounts of him seem to portray him as being a tad bit impetuous. So my first attempt to explain this change of heart was that this was just another example of Esau’s impulsive personality. It sounded to me like the story I heard about my grandpa who passed away long before I was born.  My relatives tell of the time my full-blooded Italian grandpa threatened my uncle when he was dating my aunt before they were married. My uncle was having dinner at my grandparents house when the topic of marriage came up.  My grandpa startled my uncle when he plunged his steak knife into the wooden table yelling, “If you marry my daughter, I’ll cut your heart out!” (I’m not trying to cast any stereotypes here – well, maybe I am.) Apparently, my grandfather didn’t mean it as my Aunt and Uncle have been happily married now for almost 60 years. After rereading the scripture, I decided it wasn’t that simple.

To help us understand the significance of this reunion, here is a little background on the brother’s relationship. They were non-identical twins who were born within seconds of each other. Esau was first-born which meant in their culture he was entitled to certain privileges. He was to receive a double portion of the inheritance and the legal right to call the shots in the family. But probably one of the most significant privileges that came with the position was the spiritual leadership of the family. This included, building the family’s altar, officiating at its worship and sacrifice and the eldest son had to transmit God’s word and his promises to the family. Also, we should not forget this was a very special family which God had promised to make into a great nation. Whoever held the birthright was the one through whom the promise would be realized. Ultimately, the Messiah would come through the holder of the birthright and bless the nations of the earth.

One day when the brothers were older, Esau was very hungry from being out in the open country. He asked his brother, Jacob for some stew. Jacob wheels and deals by telling him he will give him a bowl of stew in exchange for Esau’s birthright. Incredibly, Esau swears an oath and the birthright is sold. The Bible says Esau despised his birthright, so it is highly unlikely he thought very much about what he had done until Jacob dupes him again. This time some years have passed and their blind and aging father is ready to give the family blessing. Isaac asks his son Esau to go hunting and prepare him his favorite dish and then he will speak the blessing over him. Esau’s mother, Rebekah overhears the conversation and helps Jacob dress like his older brother and makes the favorite dish for him to bring to his father. Jacob poses as his brother and lies to his father more than once when he is asked if he is Esau. (Remember, Isaac is blind.) Long story short, Jacob deceives his father, receives Esau’s blessing and walks away with everything! Esau very soon after enters his father’s tent with the prepared meal only to discover what Jacob has done.  We then are told, Esau began begging and pleading for a blessing, any blessing. He weeps uncontrollably and ultimately he threatens to kill his brother, Jacob for what he has done. This is not a picture of a flippant impulsive man, but one who is greatly upset and extremely distraught.

To escape his brother’s wrath, Jacob runs away to live with his mother’s relatives in a distant town. This reunion between the brothers occurs after 20 hard years of Jacob’s dealings with his father-in-law, Laban who leads us to believe deceitfulness just might be genetic! In preparation for this reunion meeting, Jacob connives and schemes by moving his family around in a strategic procession which is also full of gifts to flatter Esau out of his anger. But after all his efforts to protect himself and his family, Jacob finds it all unnecessary as his brother welcomes him with open arms.

Esau had every justification to treat Jacob as his brother expected to be treated but instead we see a wonderful picture of unmerited grace. Does this remind you of another story in the Bible? The Prodigal Son in Luke 15. Interestingly,  Luke 15:20 uses very similar if not exact wording in the Greek as the Septuagint does in Genesis 33:4. (The Septuagint is the ancient Greek translation of the Hebrew Old Testament.) We also see the similarity in the King James Version.

And Esau ran to meet him, and embraced him, and fell on his neck, and kissed him: and they wept. Genesis 33:4 KJV

And he arose, and came to his father. But when he was yet a great way off, his father saw him, and had compassion, and ran, and fell on his neck, and kissed him. Luke 15:20 KJV

Just as Jacob schemed, lied, deceived cheated, and caused great heartache and pain to Esau, we have done likewise to our heavenly father. Just as Jacob struggled and tried by his own efforts to earn Esau’s forgiveness and found it all unnecessary, we do the same by trying to be good to earn God’s favor.  And finally, just as Esau extended grace and forgivenes to Jacob despite all the injustices and suffering, God’s amazing grace is extended to us as we become part of His wonderful plan of redemption. What a story of hope to us all! Not only are we recipients of God’s amazing grace but we also like Esau can be its conduits.  LH