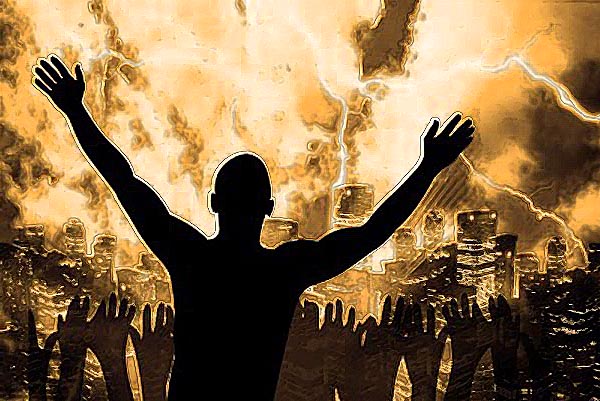 If my people, who are called by my name, will humble themselves and pray and seek my face and turn from their wicked ways, then I will hear from heaven, and I will forgive their sin and will heal their land. 2 Chronicles 7:14 NIV

Recently, I was praying for direction on what to share at an event to which I had been invited to speak.  At the time, I had not felt any particular promptings and to be honest, I was starting to get a little nervous. I decided to just read my daily Bible reading and “worry” about the message later.  As I read the daily designated verses, I was stirred by something I read in 2 Chronicles 22:7.

Through Ahaziah’s visit to Joram, God brought about Ahaziah’s downfall. When Ahaziah arrived, he  went out with Joram to meet Jehu son of Nimshi, whom the LORD had anointed to destroy the house of Ahab.

I thought I had misread the verse and went back only to discover I read what I thought I had read. The words “anointed to destroy” jumped out at me again. In forty-plus years of reading the Bible, I had never caught that phrase before!  It seemed so unusual to me and I was captivated by it. Here is some brief background on this scripture: The Kingdom of Israel was divided after Solomon’s reign. It was split into the Southern Kingdom of Judah and the Northern Kingdom of Israel. The most wicked of all the kings of the Northern Kingdom was King Ahab bar none! He and his little lady Jezebel put the ‘e’ in evil! In fact, scripture lists Ahab as the most evil of all the kings before him! (1 Kings 16:30). Because of this, God told Elijah to anoint Jehu to destroy the house of Ahab and bring an end to it. (2 Kings 9:6-7)  Ahaziah, Ahab’s son, and all his family were slain by Jehu; thus bringing an end to the wicked dynasty.

As I reread the phrase “anointed to destroy”, I pondered what relevance that might have for us today. The messianic prophecy in Isaiah 61:1 and Jesus’ fulfillment of it in Luke 4:18 came to mind.

The Spirit of the Lord is on me, because he has anointed me to proclaim good news to the poor. He has sent me to proclaim freedom for the prisoners and recovery of sight for the blind, to set the oppressed free. Luke 4:18

Then this revelation came to me. There is no way to proclaim freedom to prisoners, recovery of sight to the blind and set the oppressed free without “destroying” the one who imprisons, blinds (2 Corinthians 4:4) and oppresses! Just as Jesus came to destroy the works of the devil (1 John 3:8), we too must follow in His steps and engage in the war with evil. Just as Jehu was anointed to destroy the evil in the Northern Kingdom, we too must walk in the same anointing in our day. In the Old Testament, when a king or priest was anointed, the oil was poured on the head and it dripped down to the body. Christ, our head (Ephesians 4:15), was anointed and that same anointing flows onto His body, the church! (Colossians 1:18).

The New Testament is filled with references which warn we are engaged in a war! But a very important Word of Caution: It is not a physical, earthly warfare. It is a spiritual warfare. We do not bomb, hurt or maim our fellow-man. Our spiritual warfare is a call to prayer! Around the same time I was praying for direction for the afore-mentioned speaking event, I was sent this clip of the 2012 National Democratic Convention CLICK HERE and this clip from a very concerned parent. (Warning: The following clip contains profanity and offensive language.) CLICK HERE.  My reaction to both of these was grief and despair. But as I read those words, “anointed to destroy”, hope began to rise up in my spirit!  If you feel now, like I was feeling then, when you read the newspaper, watch the news or follow the elections, Cheer up! We can be anointed to destroy the works of the enemy, who has blinded the unbeliever!

I shared this word at the event a few weeks ago, along with several website links to prayer movements all over our nation. (There are literally hundreds of them! i.e. thecall.com, 24-7prayer.com, watchman.ca, call2fall.com) At that time, I was made aware of this National 40 Days of Prayer Campaign, If My People 2012.   It runs from September 28, 2012 through November 6, 2012. I STRONGLY urge you to participate! You can find out more about it by CLICKING HERE.

I personally have signed a declaration at onecry.com to view this declaration, CLICK HERE.