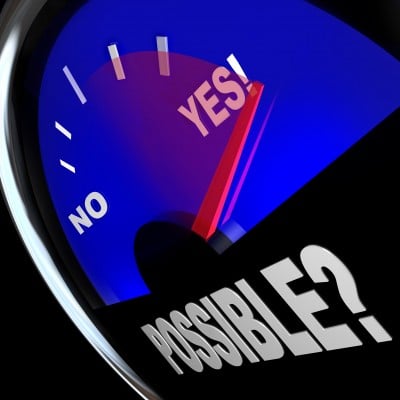 Jesus looked at them and said, “With man this is impossible, but not with God; all things are possible with God.” Mark 10:27

In the early 1950’s the radio broadcast, This I Believe, entertained listening audiences all over our nation. Inspiring essays of belief and personal motivation written by both celebrities and ordinary people were read over the airwaves and the broadcast quickly became a national phenomenon. The show, which was revived on National Public Radio from 2005—2009, included new essays along with some of the originals. One essay of special inspiration to me was by Helen Keller. She said,

Active faith knows no fear, and it is a safeguard to me against cynicism and despair.

Ms. Keller then went on to assert her belief in God as “infinite goodwill and all-seeing Wisdom, whose everlasting arms sustain me walking on the sea of life.” (To hear or read the complete essay, CLICK HERE.)

Recently, I was spending some meditative moments reflecting on what it is that I “actively” believe about God. Not just opinions, but active faith/beliefs that are actually demonstrated by my thoughts, words and the way I live my life. As I was pondering my convictions, I wrote down the following.

Soon after I had journaled these beliefs. I received a phone call from a friend who lives several states away. “Coincidentally” it was the same friend that had been on my mind for the past two weeks. I had been praying for her “generically” until I could find the time to call.  She was now calling me to ask for prayer as she had recently been diagnosed with cancer. I was stunned and so very sorry to hear of all that she had been through and of what possibly lay ahead.

After the phone call, I went back to my journal and glanced at my beliefs. This time I wasn’t feeling as fervent about them as I had before.  But something C.S. Lewis said in A Grief Observed, a book written after the passing of his wife, came to mind.

You never know how much you really believe anything until its truth or falsehood becomes a matter of life and death to you. It is easy to say you believe a rope to be strong and sound as long as you are merely using it to cord a box. But suppose you had to hang by that rope over a precipice. Wouldn’t you then first discover how much you really trusted it?…Only a real risk tests the reality of a belief.

Active faith or belief is not the absence of questioning. People with far greater faith than mine have experienced these kind of moments. The psalmist penned these words more than once, “Why, my soul, are you downcast?” (Psalms 42:11)  John the Baptist who KNEW Jesus was the Messiah, asked while he was in prison,  “Are you the one who is to come, or should we expect someone else?” (Matthew 11:2-3) Even Jesus asked, “Why have you forsaken me?” (Matthew 27:46) I began to pray, God I believe, please help my unbelief. (Mark 9:24) Almost instantly, I remembered this video clip, a friend had sent to me a few months ago. Check it out.

Isn’t that amazing? I was so encouraged when I first viewed it, but I needed to be reminded again. I believe that nothing is impossible with God! He knows our frailties and gives us signs of encouragement to prove He is who He says He is! Remember how he gave a sign to Hezekiah to assure him he would be healed. 2 Kings 20:9-11 (Check out the story in this weeks Bible Study below.) Even today as I am writing this, my cousin, Loretta posted on Facebook,

This month marks 20 YEARS of remission for me from Non-Hodgkins Lymphoma. Praise God, just can’t believe it’s been 20 YEARS!!

Our God heals!(Exodus 15:26) For all my friends and family who are suffering with disease or illness, Today I assert with you. I BELIEVE THAT NOTHING IS IMPOSSIBLE WITH GOD! I leave you with this wonderful song of healing. LH

This Study is on Healing. The Bible has a lot to say on the subject. I pray your faith is increased as you read God’s word for yourself.

God establishes very clearly in the Old Testament that He is a God who heals.

For a full appreciation of Naaman’s healing, it helps to know he was commander of the enemy’s army!

King Hezekiah was a man of faith. Even after the prophet tells him to get his house in order, he receives his healing!