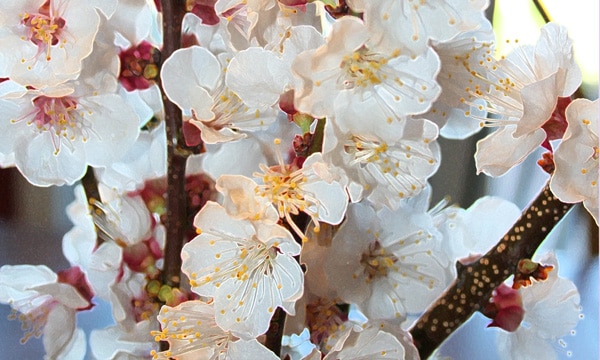 Now glory be to God, who by his mighty power at work within us is able to do far more than we would ever dare to ask or even dream of—infinitely beyond our highest prayers, desires, thoughts, or hopes. TLB

I was sipping my hot chocolate and looked up to see the apricot blossoms my husband had cut and arranged in a vase a few days before. (The week had been so hectic that I hadn’t really noticed them until that moment.) The thought crossed my mind–How unusual, I had never seen my husband do anything like that in 27 years. Perhaps he thought we should enjoy them while we could.  The weather had been warm-hence the blossoms, but now the mercury sat at about 27 degrees, threatening to kill any possible fruit on the remaining tree. 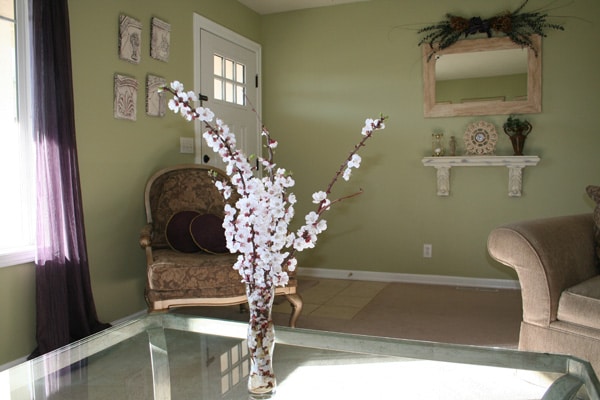 Sitting quietly in the only clean room in the house and warming my hands on my hot drink, I offered up a struggled prayer to God now that the kids had left for school and the house was empty. The dying blossoms seemed to symbolically sum up what I was feeling. My heart was heavy for dear ones whom had lost their way and the dead dreams that now resulted.

As if some quick response by the Holy Spirit to my woundedness, a portion of scripture about blossoms came into my mind. Aaron’s Rod in the book of Numbers.  I began to google it to find the exact reference and was surprised by this Google art.

Because I was looking for any kind of encouragement, to me this was not a silly coincidence but a confirmation spurring me on to see what the Lord had to say to me about blossoms again. (The Wilderness Will Rejoice and Blossom, Blossoms Of Life)

I began to read and study about Aaron’s rod. (Numbers 17:1-10) For those who are not familiar with the story–The Israelites had spent forty years in the desert. In addition to complaining about food and water, they continued to rail against the leadership of Moses and Aaron. In Numbers 12, Aaron and Miriam rebelled against Moses and it resulted in leprosy. In Numbers 14, the Israelites rebelled against Moses and Aaron which resulted in the extended stay in the wilderness. In Numbers 16, Korah, Dathan, Abiram, On and 250 others rebelled and resulted in the ground opening up with some plunging to their death and the remaining 250 were consumed by the fire of the Lord. Even after watching this take place the Israelites rebelled again later in the chapter which resulted in a plague that killed 14,700 people. Finally God gets through to them in Numbers 17! He tells Moses to get a rod from each of the tribal leaders and inscribe their name on each of them. God tells Moses to place the rods in the Holy of Holies and the rod of the one God chooses will sprout. The next day, Moses enters the Holy place and finds that Aaron’s rod has not only sprouted but has budded, blossomed and produced almonds. Settling forever that He has chosen Aaron to be the High Priest.

As I read and studied the story that morning, I was encouraged by this:

The rods were dry, dead limbs. At the time of the Israelites journey in the wilderness, as in our own time, sprouts may come forth from a living branch and even from the trunk of a tree that has been cut down.  But it is not possible for a wooden branch/rod that is long dead to sprout again. This was a miracle, an intervention of the resurrecting power of God! This is the same resurrecting power that is available to us today. (Philippians 3:10, Ephesians 1:19-20, Romans 8:11)

Whatever we are mourning over–lost loved ones, relationships, circumstances or dreams, our God is able to resurrect the situation and bring life from it! While studying, I came across this prophetic word from a blog by Jason Hooper: “Many have emerged from what could be considered a challenging season marked by an outward appearance of loss. And although there has been tangible loss, I can tell you this; it is the will of the Father that of all He has given to you nothing has been lost that will not be fully restored and completely resurrected in these coming days.” Amen to that!!

One commentator said the rods “were probably old and had been transmitted from one head of the family to the succeeding generation.”  The rod symbolized the family lineage. If we have sons, daughters, grandsons or granddaughters whom are not serving the Lord, God can resurrect His purpose and pleasure in our spiritually lifeless family!

As I have written about in past posts, blossoms symbolize the PROMISE of fruit. It is the hope that God is going to fulfill His promises.  Let hope arise in our hearts.(Romans 15:13) Just like the lifeless rod, our “dead” circumstances will blossom and God will fulfill His promises. (Deuteronomy 7:9, Joshua 21:45, 2 Corinthians 1:20)

I love, love, love–no typo there- that the rod did not just bud. It budded, blossomed AND produced fruit! It was dead but it was placed in the presence of God! Scripture says, “The next day Moses entered the tent and saw that Aaron’s staff, which represented the tribe of Levi, had not only sprouted but had budded, blossomed and produced almonds.” Numbers 17:8

The word used for produced here is the Hebrew word, gamal which means to deal bountifully. And it was no accident that the rod was an almond rod. Almonds were considered to be one of the best fruits. (Genesis 43:11)When God brings fruit out of the lifeless circumstances of our lives, it isn’t going to be scrawny sparing second-rate fruit. It will be amazing and abundant!

Below is a true story which I read often. Every time I read it my faith is strengthened!

Andrea Wolfe, on staff with the CoMission office in Raleigh, North Carolina tells the following story:
In the 1930’s Stalin ordered a purge of all Bibles and all believers. In Stavropol, Russia, this order was carried out with vengeance. Thousands of Bibles were confiscated, and multitudes of believers were sent to the gulags-prison camps-where most died, unjustly condemned as “enemies of the state.”

The CoMission once sent a team to Stavropol. The city’s history wasn’t known at that time. But when the team was having difficulty getting Bibles shipped from Moscow, someone mentioned the existence of a warehouse outside of town where these confiscated Bibles had been stored since Stalin’s day.

After the team had prayed extensively, one member finally mustered up the courage to go to the warehouse and ask the officials if the Bibles were still there. Sure enough, they were. Then the CoMissioners asked if the Bibles could be removed and distributed again to the people of Stavropol. The answer was “Yes!”

The next day the CoMission team returned with a truck and several Russian people to help load the Bibles. One helper was a young man-a skeptical, hostile agnostic collegian who had come only for the day’s wages. As they were loading Bibles, one team member noticed that the young man had disappeared. Eventually they found him in a corner of the warehouse, weeping.

He had slipped away hoping to take a Bible for himself. What he found shook him to the core.

The inside page of the Bible he picked up had the handwritten signature of his own grandmother. It had been her personal Bible. Out of the thousands of Bibles still left in that warehouse, he stole the very one belonging to his grandmother-a woman, who throughout her entire life, was persecuted for her faith.

No wonder he was weeping-God had powerfully and yet tenderly made Himself known to this young man. Though the grandmother was long dead, God miraculously resurrected and brought fruit from her life of faith. LH