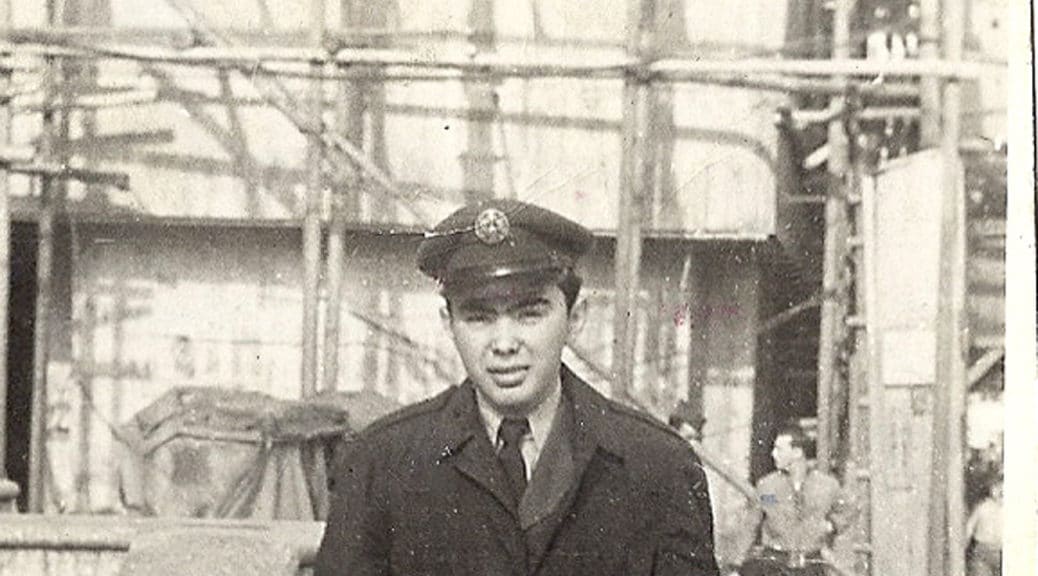 There were so many things I loved about the man whose name is etched into the marble wall at our city’s Veteran’s Memorial. This man who is my father.

He began his life in a very poor family in the very poor town of Winslow, Arizona a few years before the start of WW II. When I think of the obstacles and challenges he overcame, my heart never ceases to fill up with admiration for my father and then with Praise to my Heavenly Father who guided and protected my dad throughout his life.

As a child, despite growing up with an alcoholic father, he dreamed of a better life, different from the racism and poverty that surrounded him.

He left home a boy the age of 16 and joined the Air Force. Desperate to be in the military, we believe he did not give his correct birth date when he enlisted. After training, his first job was a radio operator.

As the Korean War was winding down, well the U.S. involvement was winding down, (There was never a peace treaty signed between North and South Korea.) my father was the Radio Operator in a C-119 plane. This model was nicked-named the “Flying Boxcar” and was used to carry cargo, personnel, litter patients, equipment and to drop cargo and troops by parachute.  One day in 1953, Anti Aircraft fire shot the C-119 down, causing the plane to crash near Daegu, South Korea (formerly known as Taegu).

In God’s providence, a young man from the village saw the plane go down. He went to the crash sight and pulled my father from the wreckage. Only my father and the pilot survived.

My father pondered often why he had survived and what divine purposes did God have in mind for him. As his daughter, I too have wondered what purposes did God have in mind for our family in sparing my father and allowing him to live, marry and have children. Because of God’s Grace, my father eventually fully recovered from broken bones and head trauma.  He suffered with only the loss of his sense of smell as a daily reminder from what he had been delivered.

In the years ahead, my father went to OCS, (Officer Candidate School) became a commissioned officer and B-52 Pilot. He flew several missions during the Vietnam War for which he was awarded the Distinguished Flying Cross.  He served 31 years in the United States Air Force and retired as a Lt. Colonel after he was grounded and no longer able to fly due to a heart condition.

Two of my father’s greatest desires were for his children to get a good education and to know God. While in the service, he himself earned a B.S. Degree in Management and a MBA. After retiring, he went to work in the private sector. He worked as a Human Resources Manager in various companies and taught Business as an Adjunct Faculty member at a Christian college.

One of my earliest memories of him was in 1969 after Apollo 11 had landed on the moon. I was 5 years old. My dad got out a trigonometry  textbook and began to teach me the basics.  He believed I was smarter, better and more beautiful than I was. He led me to believe I could do anything. Although that was a big letdown when I discovered it wasn’t true, I still loved and admired him for it. 🙂

I loved that he loved to read. Before I could read, I remember him reading to me Alice in Wonderland and Alice Through The Looking Glass. As I got older, he passionately introduced me to all the classics. Treasure Island, Silas Marner, Tom Sawyer and Robinson Crusoe being a few of them. When I was older still, he would often find something interesting in a magazine, newspaper or book and he would read it out loud–the whole thing. In my knucklehead youth it would bore me to tears and I didn’t appreciate it. But oh what I wouldn’t give to hear him read to me now. Incidentally, I inherited this from him and I imagine my children feel the same way.

I learned after a few times to never ask him how to spell a word as his response was always the same, “Go look it up in the dictionary.”  He had a way with words and said things that covered the spectrum from, “I’m busier than a one-legged man in a butt-kicking contest” to “People really shouldn’t heap vilifications on others”.

I have no doubt that I am where I am today and accomplished the things I have because of him.  When I was going to drop out of college, he encouraged me to persist.

I didn’t know it at the time but growing up , my father was teaching me the “art” of Reframing. I’m not talking about reframing family photos or fancy artwork here. I’m talking about reframing the situations of our lives by changing the way we look at them. Just as different frames can draw out different aspects of a picture, even as the picture remains the same, my father could look at any situation and find something good in it. He taught me to see a problem as an opportunity. A weakness as a strength. Someone’s unkindness as a lack of understanding. His positivity and sense of humor were wonderful examples of how to live life. He lived by Philippians 4:8. This is something that has helped me greatly as my husband and I have navigated the journey of raising two children with special needs.

My father was also a gifted musician as his father was before him. He loved to play guitar and I fondly remember him playing some of his favorite songs like Little Green Apples, Windy, and Guajira Guantanamera. I’m so grateful he passed his love of music down to his children.

In 1972, my father dedicated his life to God and made Jesus his Lord and Savior. Our family’s lives changed. I have often thought about the ramifications of this one humble decision he made to repent of his sin and acknowledge his need for a savior. We will never really know this side of heaven the full impact that decision has had. His influence over each of his five children will continue to multiply until Jesus comes. The prospects of the seed of the Gospel that he planted and nurtured in just our family alone (He had other ministries as a Church Board Member and Sunday School Teacher.) is mind-boggling. It continues to germinate in so many ways and places. It has been re-sown in many lives of servicemen and women in the United States Air Force and Army through family members who chose to serve our country in these military branches. It has been re-sown in the neighborhoods where we lived, in friends and family members. It has been re-sown in corporate officers, employees and coworkers of the companies where his children have worked at one time or another throughout our lives. It has been re-sown in the many lives of the people in the congregations of the Churches where family members have Pastored, led Worship, served on the Board, worked in the nursery, taught Sunday School, Youth or Children’s ministries. It has been re-sown on almost every continent of the world as family members have prayed, financially supported or personally gone abroad to share the Gospel. And oh so gratefully it has been re-sown in our children and our children’s children.

What profound love I have in my heart today for my father even years after he has gone home to be with the Lord.  And what profound gratitude I have for my Heavenly Father that allowed me to have such a wonderful earthly father and role model who made it easy to begin to understand God’s love for me.

Happy Birthday, Dad. One day we will all be reunited and what a glorious day that is going to be. LH

6 thoughts on “I Loved My Father”