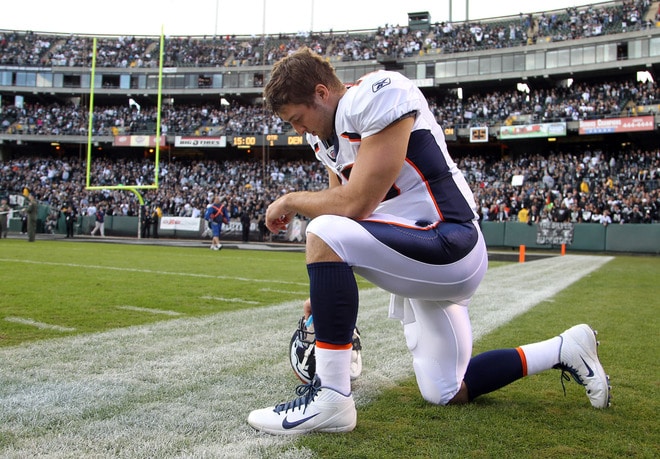 For this reason also, God highly exalted Him, and bestowed on Him the name which is above every name, so that at the name of Jesus EVERY KNEE WILL BOW, of those who are in heaven and on earth and under the earth, and that every tongue will confess that Jesus Christ is Lord, to the glory of God the Father.

A few days ago, I received this flyer in the mail from a church in our area. Kudos to whoever designed it if the intention was to get people’s attention. It sure got mine. 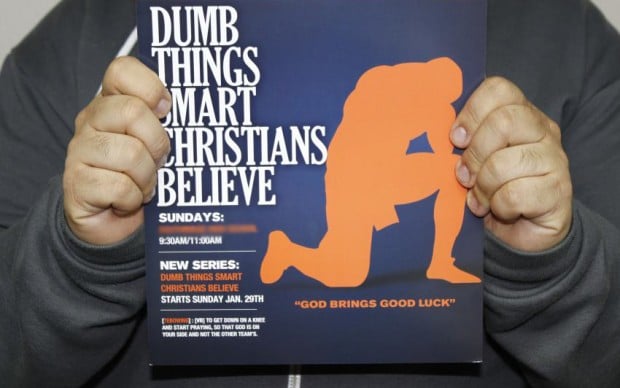 Lately, I find myself listening when anyone mentions Tim Tebow, quarterback of the Denver Broncos. If you follow sports, and even if you don’t, you most likely have heard all the press about him. He has been labeled by several news agencies as “the most controversial player in sports.” To this I say, “Really?”  More controversial than Michael Vick, Ray Lewis, Ben Roethlisberger, Donte Stallworth? (and don’t forget Pete Rose or O.J. Simpson!) That’s why when I received this ambiguous flyer, I wasn’t sure what to make of it. One thing I’d like to point out is according to this church, the definition of “Tebowing” is : (Verb) to get down on a knee and start praying, so that God is on your side and not the other team’s.  No matter how hard I tried, I couldn’t find this definition of “Tebowing” anywhere else. 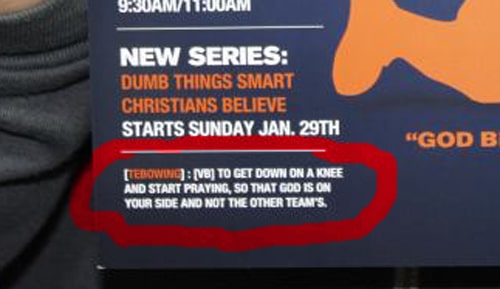 What I did find everywhere including the Global Language Monitor website is this “official” definition: “to get down on a knee and start praying, even if everyone else around you is doing something completely different.”  There is even an official website, http://tebowing.com/ which is home to the following images.

As fun as these all are, the fact is Tim Tebow has been lambasted by Christians and non-Christians alike. Although he has support from his Denver teammates who say he “walks the walk and talks the talk”, he has been criticized, judged and mocked by many. Dave Silverman, president of American Atheists has said Tebow is “full of crap” when he publicly displays his Christianity on the football field and if he were truly a Christian, he would pray in private, not public. Tebow has taken hits from all directions. (No pun intended) But according to the Bible he is among good company!

If you remember the Story of Daniel, he was a leader that stood against the counter-culture of his day. He also had quite a few folks that couldn’t stand his prayer life and public display of faith. They worked overtime to make his life miserable and even got King Darius to issue an edict that anyone caught praying to any god or man besides the king would be thrown into the lion’s den. Daniel continued to pray three times a day on bended knee as he always had, with his window wide open and well, you know the rest of the story. (If you don’t, check out the Bible Study that accompanies this post.)

It actually is quite fascinating, to see all this response to a humble act of prayer. Maybe we shouldn’t be surprised. After all, Jesus told us this was going to happen. His exhortations on this subject in His Sermon on the Mount indicate that opposition is a normal mark of being a disciple of Jesus.

Blessed are those who are persecuted because of righteousness, for theirs is the kingdom of heaven.  Blessed are you when people insult you, persecute you and falsely say all kinds of evil against you because of me. Rejoice and be glad, because great is your reward in heaven, for in the same way they persecuted the prophets who were
before you. Matthew 5:10-12

I say, “Continue in the faith Tim Tebow and all those with him who courageously refuse to hide your light under a bushel!” One day at the name of Jesus, EVERY KNEE WILL BOW, of those who are in heaven and on earth and under the earth, and that every tongue will confess that Jesus Christ is Lord, to the glory of God the Father! LH

As always, I’d love to hear from you. Feel free to comment on this post or any other.