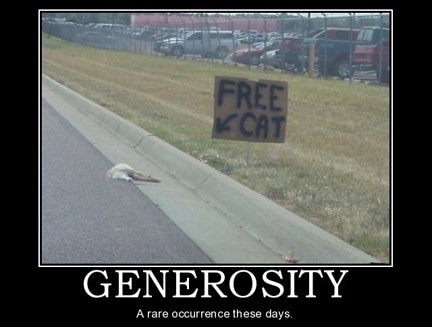 Ok, so I probably offended someone right off the bat with the dead cat picture. Sorry. Sometimes you just have to get people’s attention. John Piper, prominent pastor and author, said in his book Desiring God, “Sometimes spiritual sleepers need to be shocked. If you want them to hear what you have to say, you might even need to scandalize them. Jesus is especially good at this. When He wants to teach us something about worship, He uses a whore!” (Just to clarify, in case that also offended anyone, he was referring to Jesus’ conversation with the Samaritan woman at the well in John 4:4- 29.) This week’s post and “Just Say Know” Bible study is on the subject of generosity. When it comes to giving, some folks stop at nothing. (ba-dump-bum. Did you get it–stop at nothing!)  Seriously though, in many places, as the “demotivational” photo suggests, generosity is a rare occurrence these days. But it seems tightwaddery is on the rise!

While you can be ungenerous with compliments, appreciation, empathy and forgiveness, being generous with money seems to be the most common struggle.  One place this is evident is when it comes to tipping. I have had conversations with waiters and waitresses who hate working on Sunday around noontime, when most Christians are arriving for lunch after attending Worship services. Their perception is that Christians are the worst tippers. They see them pray over their meals and then leave a very poor tip. One waitress reported that on a few occasions she was left a Gospel tract in lieu of a tip!

This past year, I was involved in an Estate sale after my mother passed away and then dealt with trying to sell her house. It was very fascinating to watch people pennypinch at the sale and make incredibly low offers on the house, hoping to take advantage of the situation. Something happened at the Estate Sale that I hope I will never forget. On the eve of the sale, I forgot to put aside something I wanted to keep. It was a ceramic old-fashioned pitcher and wash basin bowl my mother had made in a ceramics class years ago and I had used it as an illustration in sermons on servanthood. Unfortunately, I forgot to move it aside and unbeknownst to me, one of my helpers had marked it to sell. The next day, I was at the money table with an assistant.  I looked up and saw the pitcher and bowl in a lady’s hands. She had just handed the assistant her money. My heart stopped. I was still grieving and seeing this literally made me nauseous. I kindly explained to the lady, I had just lost my mother, who had made those items and they were not intended to be for sale. I told her for her inconvenience I would pay her back double what she had just paid. To my astonishment, the Lady refused. I can’t explain the sense of loss I felt. Later, when I was thinking more clearly, I realized they were just things and in a thousand years it would not matter. But this event was a big eye-opener for me. It reminded me that everybody has a story just like I did at that moment. Sometimes when we haggle and finagle for the best deal, we forget to remember that. I once got a smashing deal on a carved redwood bear for our backyard. After I got the young man down to a very low price, paid him and drove away, my husband remarked that the original price had been more than fair. I felt so convicted. I imagined his story was that he had a wife and kids at home and they were penniless and unable to buy groceries or pay the rent!

God tells us many times in His Word, that we are to be generous. And He doesn’t stop there. He also promises us that we’ll be blessed or happy if we are!

A generous man will himself be blessed. Proverbs 22:9a

Even so, some of us are still like the man in the cartoon. We have to be encouraged and coached into releasing our grip! 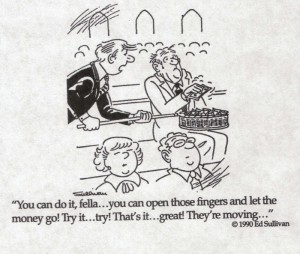 The way I see it, is that when it comes to generosity you are either an Edge Gleaner or an Extra Miler. Let me explain. In the Old Testament, God commanded the Israelites,

When you reap the harvest of your land, do not reap to the very edges of your field or gather the gleanings of your harvest. Leave them for the poor and the alien. I am the LORD your God. Leviticus 23:22

To me, this is basically an admonition to not be so selfish and to consider the needs of others by not taking every last bit for myself. Today, an Edge Gleaner is someone who likes to nickel and dime everybody and leave nothing extra for anyone else. They are the plate lickers! See if you recognize the Edge Gleaner here.

Three guys each ordered a drink. Just as they were about to enjoy their drink, three flies landed in each of their drinks. The first guy pushed his soda away from him in disgust. The second guy fished the offending fly out of his soda and continued drinking it as if nothing had happened. The third guy picked the fly out of his drink, held it out over the soda and then started yelling. “Spit it out, Spit it out, you stupid fly, Spit it out!”

On the opposite side is the Extra Miler, who is someone who heeds Jesus teaching out of Matthew 5:41-42

If someone forces you to go one mile, go with him two miles. Give to the one who asks you, and do not turn away from the one who wants to borrow from you.

These people give above and beyond. They know they serve a God who is able to meet all their needs so they bless people with their generosity. These are the type of people who say, “Keep the change!”

If you find yourself in a situation and you are torn between the two, here are a couple of suggestions I found to be helpful.  1) Ask yourself some questions like What is this person’s story? What amount would be fair? How would I want to be treated in this situation? 2) Create an imaginary Evangelism Fund. For my husband and I, it is an imaginary fund we use to help us be generous. We started our Evangelism fund years ago when we hired a lady to do some work on our house. We saw her work at a Home and Garden Show and asked her to come to our house to give us a bid. She was to paint two faux columns on the walls entering our diningroom. When she came to give the bid, she noticed our library with all the Bibles, commentaries and study aids and asked if we were Christians. I told her yes. She gave us a bid that fit into our budget and we hired her. A few days later she came to our house to start the columns. More than halfway through the project she informed me that she had under bid and had run out of materials. She had no intention of finishing the job unless we paid her more money. I told her that we only had the amount of money we had agreed upon. She left the project poorly done and would not make it right. My husband and I felt in this situation, we were not to enforce our rights but to let the lady out of her obligation. I’m not saying that we should never hold people accountable. We just felt for this situation our testimony was more important than anything else. So we laughed amongst ourselves and said the column money was coming out of the Evangelism Fund! (I suppose you could actually have a real Evangelism Fund set aside for such occasions.) When you’re out to eat and the food is so-so but the service is good–the Evangelism Fund! Sometimes, in business, when the customer thinks differently about the work you did, rather than argue your rights –the Evangelism Fund! Whenever we are tempted to be an Edge Gleaner, this imaginary Evangelism Fund reminds us that our priority is to point others to Christ through our generosity. The great thing is, even when we look at ourselves and see tightwaddery, we can always change. LH

Remember, I welcome your comments! Enjoy the study!