There are many people who believe that God does not hear us when we pray. I am not one of them. Too many times, I have prayed and God has clearly answered. Some might say that I am simply interpreting coincidences as actual answers or responses from the God of this universe. Well, decide for yourself.

We were on top of the world. We had two beautiful daughters and God had just blessed us with a wonderful baby boy. So much thought had gone into what we would name him and during the pregnancy we also started dreaming about what it would be like to have a son–Little league, football, what college would he go to, maybe he would be a pastor like his dad or even a missionary! But the dreaming stopped when he was two months old. We started noticing something was very wrong. The most notable thing was that he could not hold his head up. From that time on, we made several trips to our pediatrician until finally at eight months old, when our son had not reached any of the developmental milestones, we were advised to take him to a developmental doctor or a neurologist. We decided to take him to both. This began the long road of hospitals, specialists, blood draws, metabolic tests, EEG’s, and MRI’s. When he was around eighteen months old, he began also having seizures and that was the beginning of the darkest time in my life.

I descended into a very deep depression. Where there had been faith, doubt was all that remained. One morning, I remember desperately crying out to God. I started to beg Him to touch my son and help him to be able to understand so we could communicate with him. Not having enough faith for such a prayer, I stopped and decided all I wanted was just to know if God even heard me. I felt completely alone and didn’t even have the faith to believe he was listening to my cries. I repeatedly told him, “All I’m asking is for you to let me know you hear me.”  Trying to encourage myself, I finished this time of prayer by speaking out loud the verse, 2 Corinthians 2:9, “No eye has seen, no ear has heard, no mind has conceived what God has prepared for those who love him.”  Then I went up from my knees as depressed as when I went down on them. I definitely had not anticipated what was about to happen.

A few days went by and I received a letter from a lady in our church. Her letter said that while she had been praying that morning, the Holy Spirit prompted her to write me a letter.  She felt that God wanted me to know how much He was pleased with me and so she wrote to me. There were two things in the letter that really got my attention. First, were the two scriptures she had included in the letter: “As soon as you began to pray, an answer was given, which I have come to tell you for you are highly esteemed.”  Daniel 9:23. And “Since the first day that you set your mind to gain understanding and to humble yourself before your God, your words were heard, and I have come in response to them.” Daniel 10:12.  Second, was how she ended her letter. She wrote, “And remember to keep on praying, No eye has seen, no ear has heard, no mind has conceived what God has prepared for those who love him.” Somebody had heard my prayers! I am fully convinced that the Holy Spirit prompted this lady to write that letter and directed her on what to write. God was speaking to me clearly. As soon as I began to pray he heard me! If you are in a time of doubt and questioning, I encourage you to remember that God is listening. Isaiah 65:24 says, “Before they call I will answer; while they are still speaking I will hear.” God knows our frailties and He speaks to us in our moments of desperation.

Although, I have just shared one of the most faith building responses to my prayers, I could write a book about all the other times God answered our prayers. There was the time our daughter was turning sixteen and asked if we could buy her a car. Her father told her we didn’t have the finances but encouraged her to pray and ask God to provide for her. When she told us about a 1985 Mercedes-Benz that a neighbor was selling, I laughed. But my husband again encouraged her to pray. That week we got a card in the mail from some old friends from our college days. Inside the card was a check for the EXACT amount the neighbor was asking for the car! 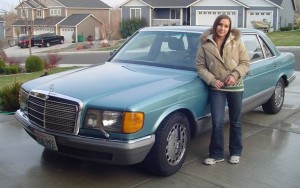 There was the time I was praying for a friend who lived in another city. She was just on my mind and I hadn’t seen her for a while. I went to sleep one night and I dreamed that she was falling deeper and deeper into a pit. When I woke up, there was a man’s name on my mind that I felt had something to do with her. I called her up and told her about the dream and then asked her if this name meant anything to her. I could hear her surprise on the other end of the phone. She then confessed that she had crossed the line in a relationship at work with a married man by that name! I told her God loved her so much that He gave me that dream to warn her about such a destructive relationship.

Another time, my husband and I had been praying about how to invest some inheritance money we had received. Our desire was to invest it wisely so that there would be something more substantial available to help take care of our two children with disabilities after we passed away. We had received some counsel  from a friend about purchasing some property to build on but we still were not sure. One Saturday, we went for a long walk and discussed our plans.When the walk was over, we were still undecided. The next day, we went to church. As we walked in, we received a program which in big bold letters showed the sermon title, ACQUIRING THE PROPERTY! We looked at each other and laughed. I know what you are probably thinking–that it was a coincidence. Was it? Of course, we wouldn’t make a major decision on such an occurance alone. We make sure everything lines up with scripture, we seek godly counsel, and we pray. (Not necessarily in that order!) For another story about God answering prayer, click on this link for the post, “The gift of the Magi.” I could tell you many more examples, but I will save them for another day!

Somebody out there needs to hear this. You need to hear that you are not alone. Feel free to leave a comment and let me know if this message was timely for you. I close with a wonderful song of encouragement, Are You Listening? May God bless you and encourage you through this post and don’t forget to check out the “Just Say Know” Bible Study below for more on how God hears our prayers. LH

God Can You Hear Me?