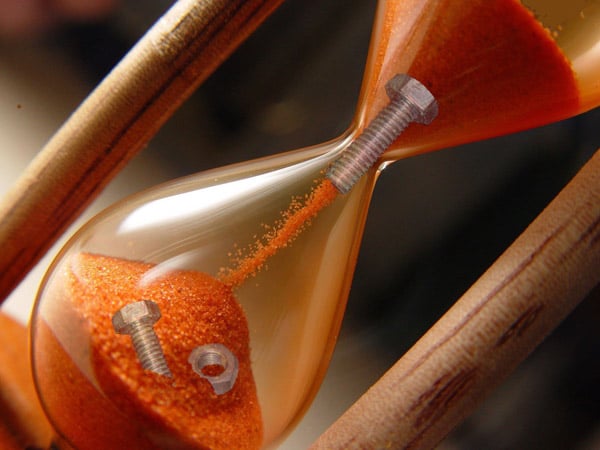 The steps of a good man are ordered by the Lord. Psalms 37:23

Coincidentally, I recently came across a very interesting article about a bolt. Yes, a bolt. The writer was formerly a CNC machinist, but for sometime now had been in a white-collar desk job. One day, he found himself with some free time and decided to change the front brake pads on his car. By his description, it was an easy job that should have taken him no more than an hour. But when he was half-done and ahead of schedule, he came upon a bolt that would not budge. To make a long-story short, he spent the next six hours torching, twisting, lubing, hammering, filing, cutting, and finally UNSCREWING the little bolt but not without leaving him with some bloodied knuckles! He concluded his article by explaining some lessons this experience with the inanimate object had taught him. The greatest one being he had begun to take this kind of work for granted and lost a level of appreciation for those that literally keep our country going by working with their hands.

This story of the man’s encounter with the inanimate object brought me back a few years to an unusual church service. It was that time in the service when people were invited to give a short encouraging word to edify the congregation. I was debating with myself about sharing my own encounter with a bolt but thought it might sound a little ridiculous. I had pretty much talked myself out of sharing when a lady in our church quickly popped up and said, “The Lord uses inanimate objects!”and just as quickly sat down.  While this lady’s behavior might have seemed strange to some, it was not to those who knew her. She had a brain tumor removed when she was younger and it left her with a cognitive deficit. What I still find awesome to this day is how the Lord often used this lady to encourage our congregation. Well, this day was no different. Because of her encouragement, I then felt compelled to share my “bolt” story.

It was a snowless, cold winter night but the roads were covered with black ice. Ordinarily, I would not have gone out in such weather, but my husband wasn’t home and my mother needed to be picked up from the Dialysis Center. I had safely dropped her off at her home and was headed to my own home traveling very slowly. I had just driven over the top of a hill, when to my surprise there was a three car accident immediately below me.  Since I had been driving so cautiously, it was not hard to brake and stop the car. But because the road was so slick, my van began to slide very slowly and I landed in a big ditch. There happened to be an officer already present because of the earlier accidents. He came and investigated the road where I had slid and remarked about a gouge in the ice that covered the distance from where I had stopped to where my van went into the ditch.  The officer then filled out an accident report and called a tow truck. The tow truck operator came, pulled the van out of the ditch, looked it over and gave me the green light to drive it home if I promised to take it to a mechanic the next day to have it checked more thoroughly.

The following day I drove it to the mechanic and everything seemed to be working fine with one small exception. There was a bolt in the front tire. I was encouraged to take the van in to Costco to have the tire repaired. The mechanic suggested I go early the next morning to avoid a long wait. I arrived early that Saturday at Costco only to find everybody else had the same idea. They weren’t able to repair the tire, which meant I had to purchase two new tires and there was going to be a 3 hour wait. It was right about then that I started to get a little whiney with God! “I was doing a good deed. Couldn’t you have prevented this from happening? Now I’m going to have to pay 200 bucks and waste three hours of my time!” I was stuck at Costco feeling sorry for myself and trying to kill time when I ran into my good friend. She was just leaving Costco to go to her daughter’s basketball game. After hearing my frustrating situation, she invited me along. We got to the game, climbed the risers and found a seat. I had only been there a few minutes when I happened to look over to my right. There seated close by were two men from the church we had pastored eight years before. As we sat and talked I learned that they both had gone through some rough times and neither one had been involved in a church for quite a while. I had the opportunity to listen to and encourage them as we watched the game. When the game was over, I invited them to join us the next day at the church where we were presently pastoring.

Both men were there the next day which happened to be the morning I shared my “bolt” story. After the service, they came up to me and thanked me for sharing about the bolt. We all were amazed at how God arranged so many events that culminated in these two men re-dedicating their lives and coming back into a deeper relationship with Him.  If it hadn’t been for that bolt, I would not have been stuck at Costco, where I was waiting and “coincidentally” ran into my friend, who “coincidentally”, invited me to her daughter’s basketball game, where “coincidentally”, the granddaughter of one of these friends was playing in the same basketball game! (Oh, also, while I can’t prove it, I believe it was the bolt that left the scratch in the ice, slowing the momentum of my van while it was sliding and keeping it from serious damage!)

I am sure you gathered by the placement of the quotation marks that I don’t believe anything that transpired was actually a coincidence. I believe it was “providence”. The word comes from the Latin providentia (Gk. pronoia) and means essentially foresight or making provision beforehand.  As applied to God, it expresses His attention and magnificent power exerted in and over all His works. It is the opposite of “chance,” “fortune,” and “luck.” Stephen Charnock, a puritan pastor appropriately once said, “He that denies providence denies God’s attributes, His omniscience which is the eye of providence, His mercy and justice which are the arms of providence, His power which is its life and motion, His wisdom which is the rudder whereby providence is steered, and holiness the compass and rule of its motion”

The Bible is full of scriptures that reveal God’s amazing involvement in even the minutest details. One of my favorite biblical accounts is of the marriage of Isaac and Rebekah. Abraham sends his servant to find a wife for his son, Isaac, and God providentially directs him to Rebekah. Another story of Divine Providence is how Moses’ life gets spared and he is raised in the Pharoah’s household. (To read these miraculous accounts see Days 3, 4, and 5 in the “Just say Know” Bible Study Link below.) I once heard the quote,“A coincidence is a miracle in which God prefers to remain anonymous.” But I have found they happen so often, anonymity for our God is impossible–if that is possible! 🙂 God’s fingerprints are all over every aspect of our lives. I believe He wants it that way. He wants us to know we can have full confidence in Him. What I find most comforting, is that there is a special providence for those who put their entire trust in God. Our times are in his hands and he is directing our steps. LH

The Nuts and Bolts of Providence